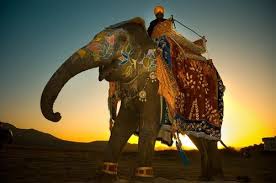 Colombo was done and in the early hours of the morning I embarked on an odyssey which even Homer would have smiled at.
The initiative had come from Pundit, whispering about a famous tooth which could be visited in Kandy, up in the highlands.
Disembarking, my backside tingled after hours of being beaten on the wooden bench in the bus. The early morning, veiled with the promise of a new day hummed quietly, as I stepped into an elephant turd. About the size of a 10L bucket, & still steaming, its owner brightly painted and tinkling with trinkets swayed comfortably down the road in front of me.
Welcome to planet India, magical in its chaos, dirt and vibrant colours. A fragment from the Middle Ages turbaned and sari ed swirled around my tired vision and I smiled.
Yes I smiled, as a deep sense of recognition and understanding washed across my soul, this was my deja vu, my odyssey beginning, my Parsifal journey to an unknown grail.
Later that day I met Buddha. His huge golden image illuminated by oil lamps and awash in swaths of sweet incensed smoke, his gaze fixed on the casket, containing his once living tooth.

Aragum Bay has no real geographical or even geological significance. It marks the South eastern most corner of Sri Lanka with a rocky point. This point however is so exactly positioned that the ocean swell, after traveling thousands of sea miles, is tripped and dissected, resulting in a perfect and pristine curving wave. A Shangri-La, for surfers like me to enjoy in the solitude of paradise lost.
“Guten Tag, wie heist du?” a foreign language but a friendly bearded face greeted me as I entered the palm hut just off the beach, “Welcome to Aragum Bay!”, here we surf with the elephants.